Geoff Watts, a well known SWL and editor of the DX News Sheet developed the “Islands on the Air” (IOTA) award program in 1964. Many of the islands counting for IOTA also qualify as islands for the DXCC program so those who are active in DXCC have a head start. As IOTA grew in popularity, additional resources were required and the award was acquired by the Radio Society of Great Britain in 1985. The IOTA 50 year anniversary was celebrated in 2014 in Windsor, England. Thanks to IOTA, the interest in Island Hunting has increased rapidly which has encouraged other radio associations to create awards for working islands in their own countries.  Recently, the RSNA passed the program to some avid island chasers that modernized the program.

The photo below is just one of the many beautiful awards (Worked 1000 Island groups) issued by IOTA. 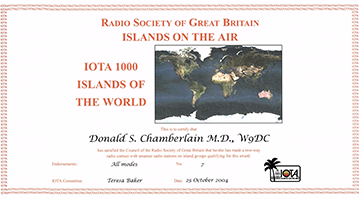